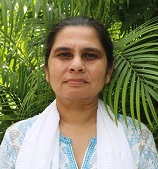 Having been in teaching and research for over 21 years, she is passionate about her subject, and sharing it with others. Extremely versatile in her interests, her research has covered a wide range of topics, from abstract algebra to creating algorithms for designing curves during her PhD, even venturing into disease modelling and epidemiology.  She has also worked on a project sponsored by the National Board of Higher Mathematics (NBHM) at IIT Kanpur, during which she was part of a team which was working on developing computers as a teaching aid in Mathematics.

After her PhD she was awarded a research project under the “DST Fast Track Young Scientist Scheme” which was carried out at JNU, New Delhi, during which time, she continued her work on developing algorithms for designing curves and surfaces. She has presented various research papers at international conferences held at Dubai, Malaysia, Turkey, China and Zurich, and has also published her research work in reputed international journals.

A teacher at heart, she has taught various courses over the years, often stepping out of her comfort zone, to teach unfamiliar subjects, such as financial modelling, biostatistics, statistical quality control etc. She has also guided students in small research projects within and outside the scope of their curriculum, instilling a love of research even in young hearts and minds.