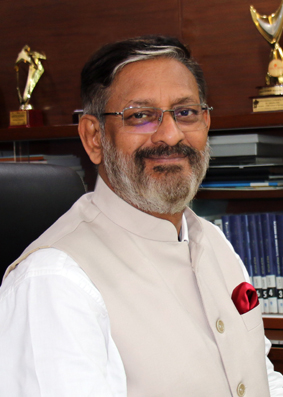 Dr. Jitendra Das, Director, FORE School of Management, New Delhi since 2010 and Director General from November 2022, was a Professor of Marketing and the founder Dean (Noida Campus) of the IIM Lucknow. With a B.Tech. and M.Tech. both from the IIT Delhi, he obtained his Ph.D. degree from the University of Toronto, Canada with 'Management Science (applied to forest products)' as the Major Area and 'Econometrics' as the Minor Area (obtaining “A” category grades in all courses taken as a requirement for the Ph.D. degree). He was also a recipient of the most coveted Connaught Fellowship of the University of Toronto for three years - the maximum years it is given. He also completed a Summer Program Certificate in 2003 from the Massachusetts Institute of Technology, Cambridge, USA titled "Individual Choice Behavior: Theory and Application of Discrete Choice Analysis to Consumer Demand and Market Share".

In his total 41 years of experience, he worked for two years in Urea-Ammonia Plant/ Sulfuric Acid-Fertilizer consulting firm, in line with his Chemical Engineering degree, before pursuing M.Tech. (Management & Systems) from IIT Delhi. Thereafter he worked for WIPRO Ltd. in their sales/marketing team for about four years before moving into academics in 1987. In 1998 he completed his Ph.D. from the University of Toronto. During his academic years he has been a consultant to the World Bank, IDRC (Canada), GWB (for GTZ Germany), Coal India Ltd., GlobeCast India (a division of France Telecom), various ministries of the Government of India, etc. and member of a few policy committees of the Government of India. In academics, he has been associated with teaching courses at IIMs at Ahmedabad, Kozhikode and Lucknow, SP Jain Management Center, Singapore and at Danube Business School, Danube University Krems, Austria.

Dr. Das has received numerous awards and honours. To name a few: In November 2021 he received the award for “Best Director for Good Governance in Management Education” in the ASSOCHAM summit on “The EduMeet 2021 & Excellence Award Education & Skill Industry”; In September 2020 he received the ‘ASSOCHAM Spirit of Self Reliance Award’ at Knowledge Management Virtual Meet on Skilling & Vocational Training & Awards; In February 2020 he received the ‘Certificate of Excellence’ and the award for ‘Leader in Asia with Global Vision and Outlook’ in the 3rd Asia Pacific Education and Technology Awards (APETA 2020) organised jointly by ASSOCHAM, Education Post and Knowledge Chamber of Commerce and Industry at Ahmedabad; In December 2017 he was felicitated as a “VISIONARY EDULEADER OF INDIA” by Sri Pranab Mukherjee, The Education President of India during Re:think India The Fifth Estate ‘National Convention of eduLEADERS & eduPRENEURS in HIGHER EDUCATION’ held in Delhi; In January 2017 he received the award “One of Asia’s 50 Greatest Leaders 2016” in the Indo-Singapore Business Congress “Asia’s Greatest Brands & Leaders 2016” organised by AsiaOne Magazine & URS Media Consulting Pvt. Ltd. at Singapore; In April 2014 he received ‘India Education Excellence’ award for ‘Outstanding Contribution to Leadership Development’ by Worldwide Achievers and Headlines Today at New Delhi (about 80 institutional awards and only one individual award—to Dr. J. K. Das—were given in this gala event); In September 2013 he was honored with the ‘BEST DIRECTOR’ award in the Asian Education Leadership Awards 2013 at Dubai, etc.